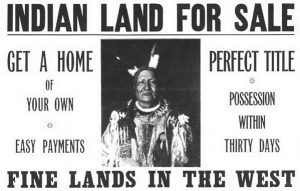 Of the sources and resources that exist for exploring Native American history and genealogy, perhaps none is so quoted and yet so misunderstood as the Dawes Roll.

Named for U.S. Senator Henry Dawes (R-Mass.), the Final Roll of the Five Civilized Tribes, as it’s properly known, arose out of the General Allotment Act of 1887, also known as the Dawes Act or Dawes Severalty Act. That act authorized the President to survey the land in Indian Territory and to divide the area into sections that would then be allotted to individual Indians our households thereby giving them title to the land in fee simple.  It was enacted February 8, 1887 and amended in 1891, 1898 by the Curtis Act, and in 1906, by the Burke Act.

The act was the keystone of a larger philosophy subscribed to by some politicians at the time who believed that the ultimate salvation for Native peoples was to even further emulate the lifestyle of their white neighbors and individual land ownership was considered an essential part of that lifestyle. Dawes is quoted as saying that in order to be civilized one must “wear civilized clothes, cultivate the ground, live in houses, ride in Studebaker wagons, send children to school, drink whiskey [and] own property.” While there are those who believe that the Senator was sincere in his desire to help Native tribes in Indian Territory, there are many others who point to the Dawes Act and the subsequent Curtis Act as an example of how the government was, once again, scheming to steal land belonging to Native Americans and destroy tribal governments that had stood in the way of American progress for centuries.

The resulting roll which covered the so-called Five Civilized tribes — Choctaw, Creek, Cherokee, Chickasaw and Seminole — was created to allot lands surveyed under the original 1887 act to Indians living in Indian Territory. As a family historian, then, this information is only pertinent to my search if my ancestors 1. Lived in Indian Territory with their tribe, 2. Did so between the years 1896 and 1904 and 3. Could prove that they or their family had a blood connection to the tribe. This was typically done in interviews with Commissioners and by connecting the applicant or his/her parents back to tribal censuses.

Make no mistake, the information that comes in a Dawes Roll application packet can be absolute gold for the family historian. All kinds of documents were submitted by applicants including delayed birth certificates, marriage licenses and even testimony from people who knew the applicant’s family well.

As long as you understand its shortcomings, the Dawes Roll can be a fantastic resource in your search for your Indian roots.